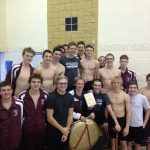 Congratulations to the Boardman boys swim and dive team for winning the All American Conference Championship on Saturday, January 17.  The meet was held at Warren Harding High School and both the boys and girls teams won the AAC Championship in Boardman’s first year in the new league.  Both teams set numerous meet, pool and school records. 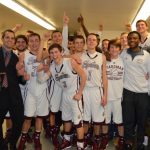 The Boardman boys basketball team had a big win against arch-rival Austintown Fitch in the Boardman gym last night.  It was elementary school night and it proved to be an exciting contest for them and all the Spartan fans to see.  The Spartans were behind 11-3 after the first quarter and behind 23-15 at halftime 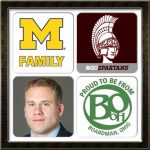 D.J. Durkin, a 1996 Boardman graduate has been named the Defensive coordinator and linebackers coach at the University of Michigan.  Coach Durkin was an all-conference and all-Northeast Ohio selection while playing football for the Spartans.  He earned a scholarship to Bowling Green where he played from 1997-2000 and served as team captain his senior year. 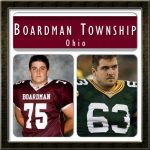 Corey Linsley, a 2009 graduate of Boardman High School was named on January 13th to the National Football League all-rookie team as selected by the Pro Football Writers of America.  Linsley, a fifth-round draft choice, beat out a half-dozen other rookie centers and is the first center from Green Bay selected in the 41-year history 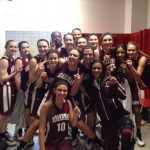 The Lady Spartans varsity basketball team defeated Cardinal Mooney on Saturday, January 10th by a score of 44-29.  In the Spartans season home opener on November 29th, they lost to the Cardinals 62-58 but came back strong in their second outing. They led by 15 points after the first quarter and by 20 points at

The Center Middle School 7th grade boys basketball team opened up their season on December 8th defeating cross-town rival Austintown Fitch by a score of 45-36 in an exciting overtime game.  Two days later they defeated the Warren White team 50-28 led by Wrentie Martin with 12, Derrick Anderson with 11, Jimmy Goske with 8,

The freshmen girls basketball team lost their first game of the season to Massillon Jackson 29-25.  Cassie Stitt led the Lady Spartans with 8 points, Katelyn Sawyer and Annaliisa Cordova had 6 points and Riley Zawrotuk had 5 points.  On January 5th, the girls lost another close one to Girard by a score of 33-31.

The Boardman junior varsity boys basketball team defeated Howland on January 3rd by a score of 60-42.  The Spartans were led by sophomore Jared Jay scoring 19 points, Ayo Ojewale had 9 points and Mike Melewski and Caleb Emerson had 7 points each.  They led 30-25 at halftime and outscored Howland 16-7 in the third

On Tuesday, January 6th, the varsity boys basketball team had an impressive win over a tough Louisville team by a score of 49-45.  Louisville came into the game at Boardman with a 7-1 overall record.  The Spartans led from the beginning as they were ahead 10-4 after the first quarter and 20-17 at halftime.  In

The Glenwood boys 8th grade basketball team has a 2-2 record heading into the month of January.  They beat a previously undefeated Canfield team by the score of 36-29 to notch their first win of the season.  Coach Justin Coffin complimented his team saying. “we played a great defensive, physical game against a much bigger