The Spartan boys swim team opened the 2014-2015 season with a win against Warren Harding and losses to North Canton Hoover and Wooster.  Against Hoover, the boys lost 102-84.  Freshmen Kyle Kimerer opened the season by setting a new freshmen school record in the first event, the 200 yard freestyle with a time of 1:50.70.

The girls bowling team defeated Howland for their first win of the season by a score of 2015-1998.  Alexis Grim topped all scorers with a 246 game.  Gloria Hynes chipped in with games of 179 and 176.  In the opening match of the year, the girls team fell to Austintown Fitch by a final score

The Boardman varsity boys bowling team defeated Austintown Fitch in the opening contest of the year for both squads.  They defeated Fitch by a score of 2579-2296 and were led by Nick Tancabel who had scores of 243 and 213.  Jake Wagner had the top individual game score of 248 while Jason Babnic contributed a

The Boardman boys junior varsity basketball team won their first two games of the season by defeating the Raiders from Warren Harding in a close contest 50-48 in the season opener.  On Tuesday, December 9, they defeated Liberty by an impressive score of 56-26.    In the Harding game, the scoring was evenly distributed as

IMG_3488IMG_3488   Watch the video of the boys basketball team winning their first game of the 2014-2015 season with an exciting double over-time win against Liberty 59-57 on Tuesday, December 9th.  Leading the way for the Spartans was freshmen Holden Lipke with 14 points, junior Gannon Murray with 11, senior Jon Michael Dana with 11 and 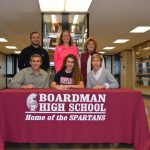 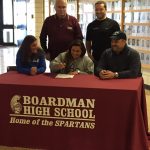 Spartans News · Dec 3 Welcome To The Home For Boardman Sports

Winter sports are here and now the Spartans will feature an online presence that will cover our schools athletic programs like never before.  Stay tuned for more details and exciting news! 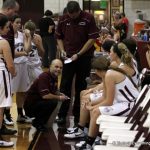 Head Coach Jeff Hammerton leading the Lady Spartans in their home opener against Cardinal Mooney on Nov. 29.  The girls lost a hard fought battle by a score of 62-58.