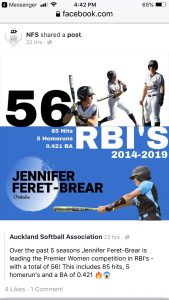 Jen Feret-Brear, Boardman graduate of the class of 2003, has been having great success playing professional softball in Auckland, New Zealand for many years.  Over the past five seasons, she has been leading the Premier Women’s competition in hitting.  This year she is leading again with 85 hits, 5 home runs, 56 RBI’s, and a BA of 0.421.  Feret was an instrumental part of the Lady Spartans softball dominance in the early 2000’s which included the 2001 State Championship team and State Runner-up Team.  After graduation from high school, she went on to play collegiately at Mercyhurst University  where she majored in education and psychology.  She graduated from Mercyhurst in 2007.