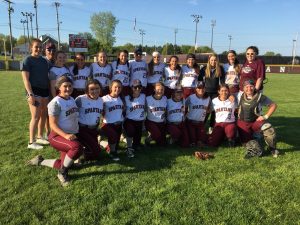 Congratulations to the girls varsity softball team as they were crowned Sectional Champions tonight by defeating the Canfield Cardinals 6-0.  The Spartans earned the right to host the game by earning the #4 seed in the tournament.  The Cardinals were seeded fifth.

The Spartans move on to the District Semi-final game to be played on Monday, May 13 against the #1 seed Hudson Explorers.  They will play at 4:00 p.m. at Roxbury Elementary School in Solon.  The address is 6795 Solon Blvd, Solon, Ohio  44139.

Good luck to our Spartans who are having a great year with an overall record of 17-7.  Go Spartans.