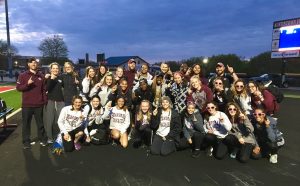 Congratulations to the Boardman girls varsity track and field for winning the All American Conference Championship tonight at Austintown Fitch.  The Spartans scored 147 points to defeat Austintown Fitch by 10 points.  This is the third conference championship in a row for the Lady Spartans led by Head Coach Rick Sypert.  In his five years at the helm of the girls team, he has led them to 4 conference championships in the past five years.  Canfield finished third (86 points), Howland fourth (78.50), Harding fifth (52), and Lakeside placed sixth (20.50).

The 4 x 400 meter relay team of Emma Tokarsky, Julia Schrembeck, Salina Jackson, and Raegan Burkey with a time of 4:12.48.

The Spartans placed two girls in every event and the depth of the team certainly showed.  Congratulations to the girls, Coach Sypert and his coaching staff for an outstanding performance tonight.