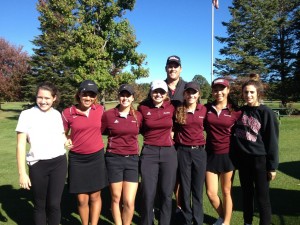 The Boardman girls golf team captured the Sectional Championship crown at the Tamer Win golf course on Monday, October 5.  Their total team score was 328 and leading the way for the Lady Spartans was sophomore Jenna Vivo shooting a 75.  That score gave her runner-up medalist honors.  Junior Jacinta Pikunas shot an 82, sophomore Britney Jonda carded an 83 and senior Tori Augustine shot an 88.  Freshmen Maya Stinson carded a 96 for the Spartans as the fifth member of the team.  Only five members from each team are allowed to compete at the Sectional Match.

The Lady Spartans outdistanced Notre Dame Cathedral Latin with 346 points, Kent Roosevelt with 352 points and Canfield with 358 points.  The top four teams now qualify to the District Tournament next week.  From the Districts, the top four teams will qualify to the OHSAA State Golf Championships.  The Spartans also captured the All American Conference title in the Red Tier with a league record of 9-1. losing only to Lakeview.  Their overall season record was 17-1.  Congrats to the Lady Spartans and Coach Brian Terlesky and good luck at Districts next week.